This campaign is no longer active and has not been relisted. 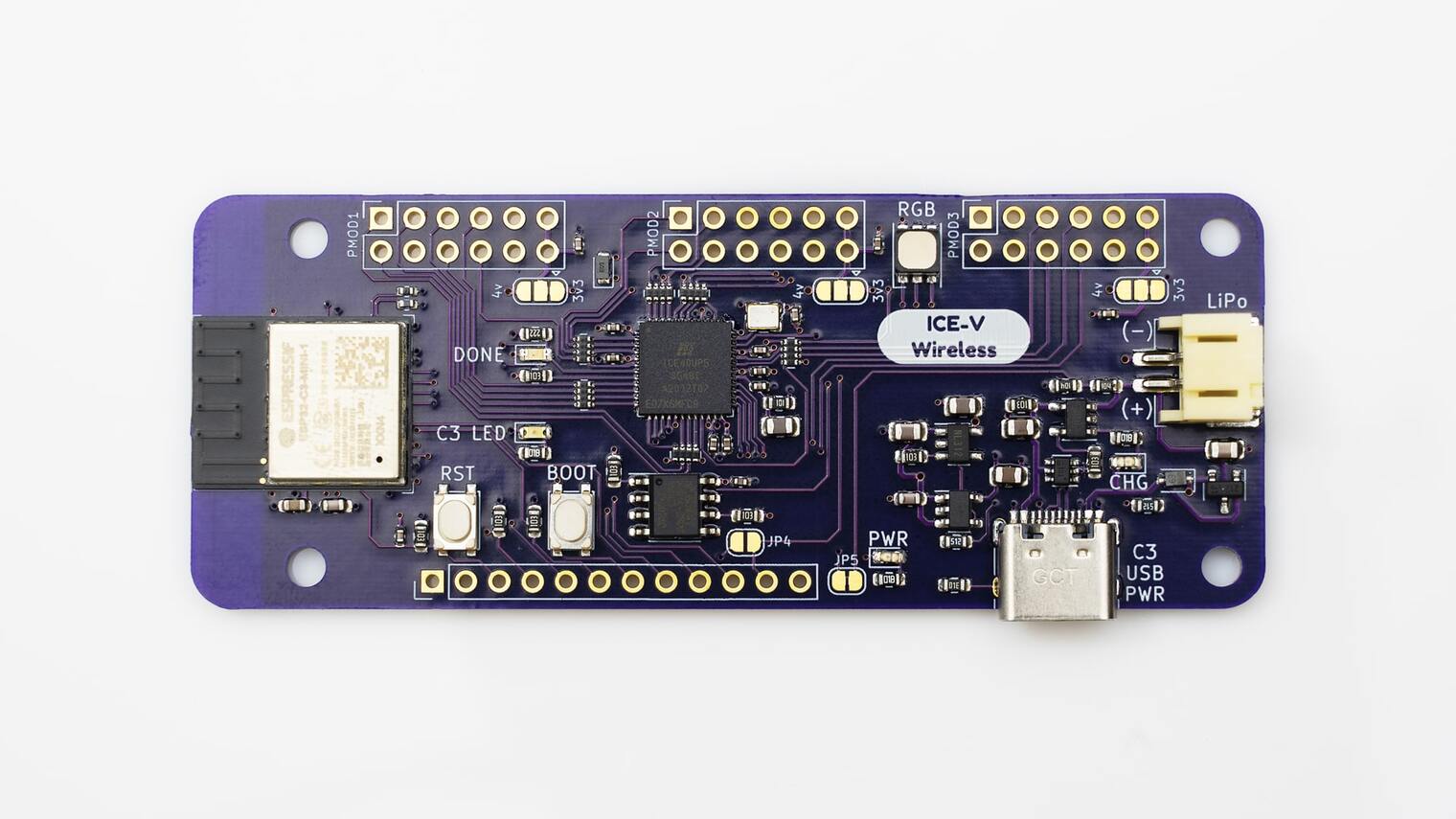 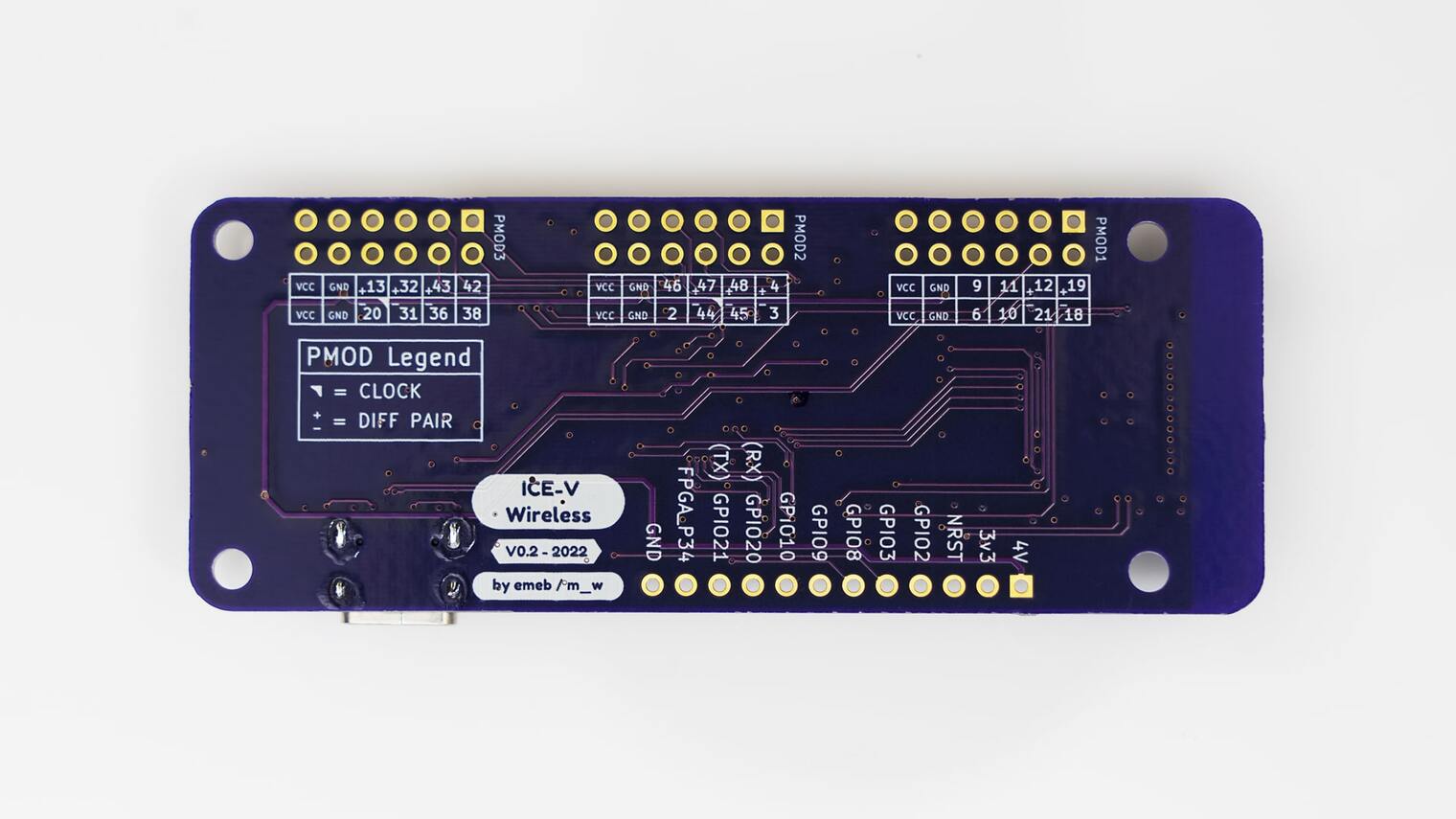 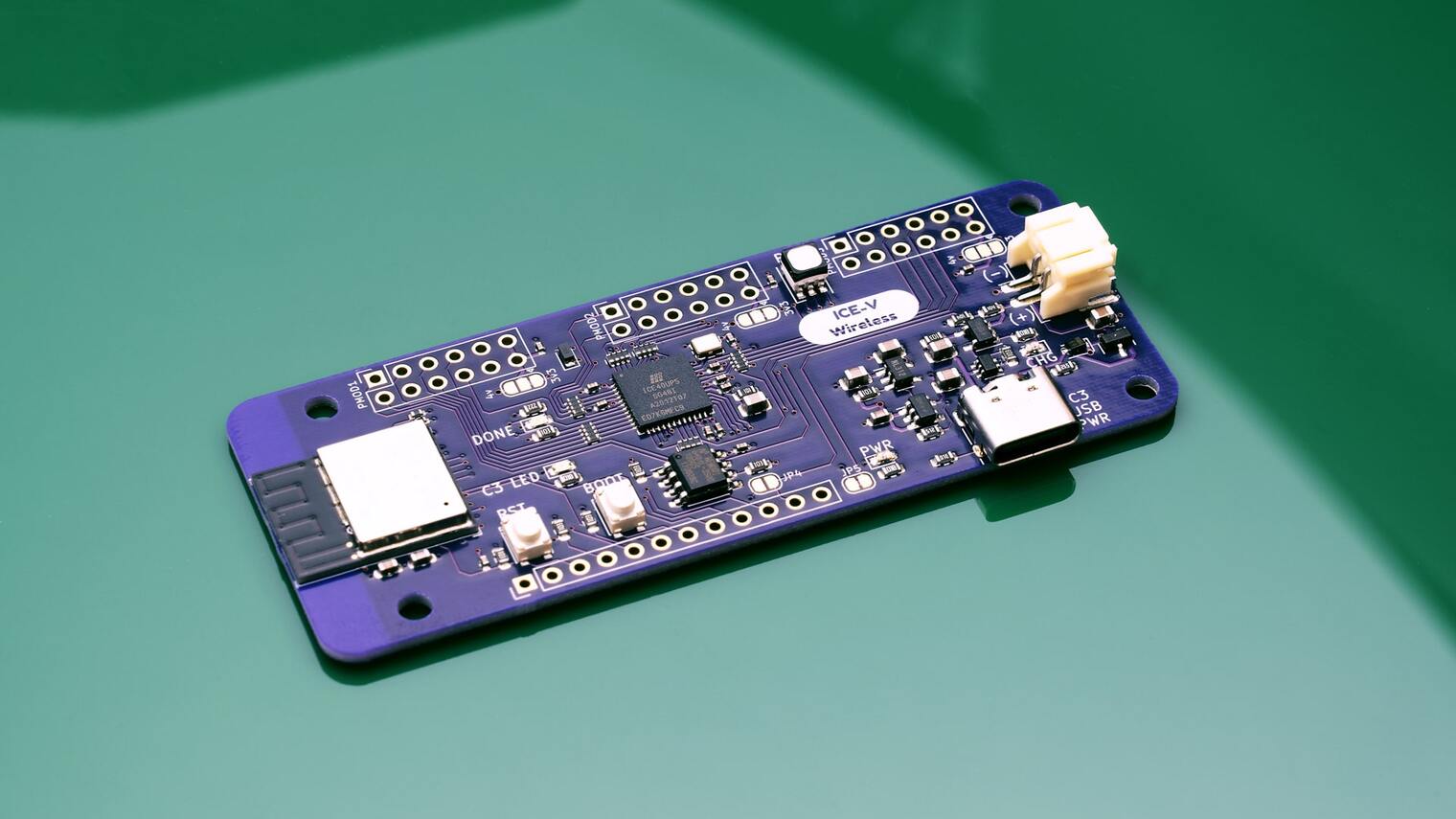 ICE-V Wireless is an ICE40UP5K+ESP32-C3 development board, allowing Wi-Fi and Bluetooth control of the the FPGA by combining an Espressif ESP32C3HN4 SoC with a Lattice iCE40 FPGA. Additionally, several ESP32C3 GPIO pins are available for additional interfaces, such as serial, ADC, or I2C. 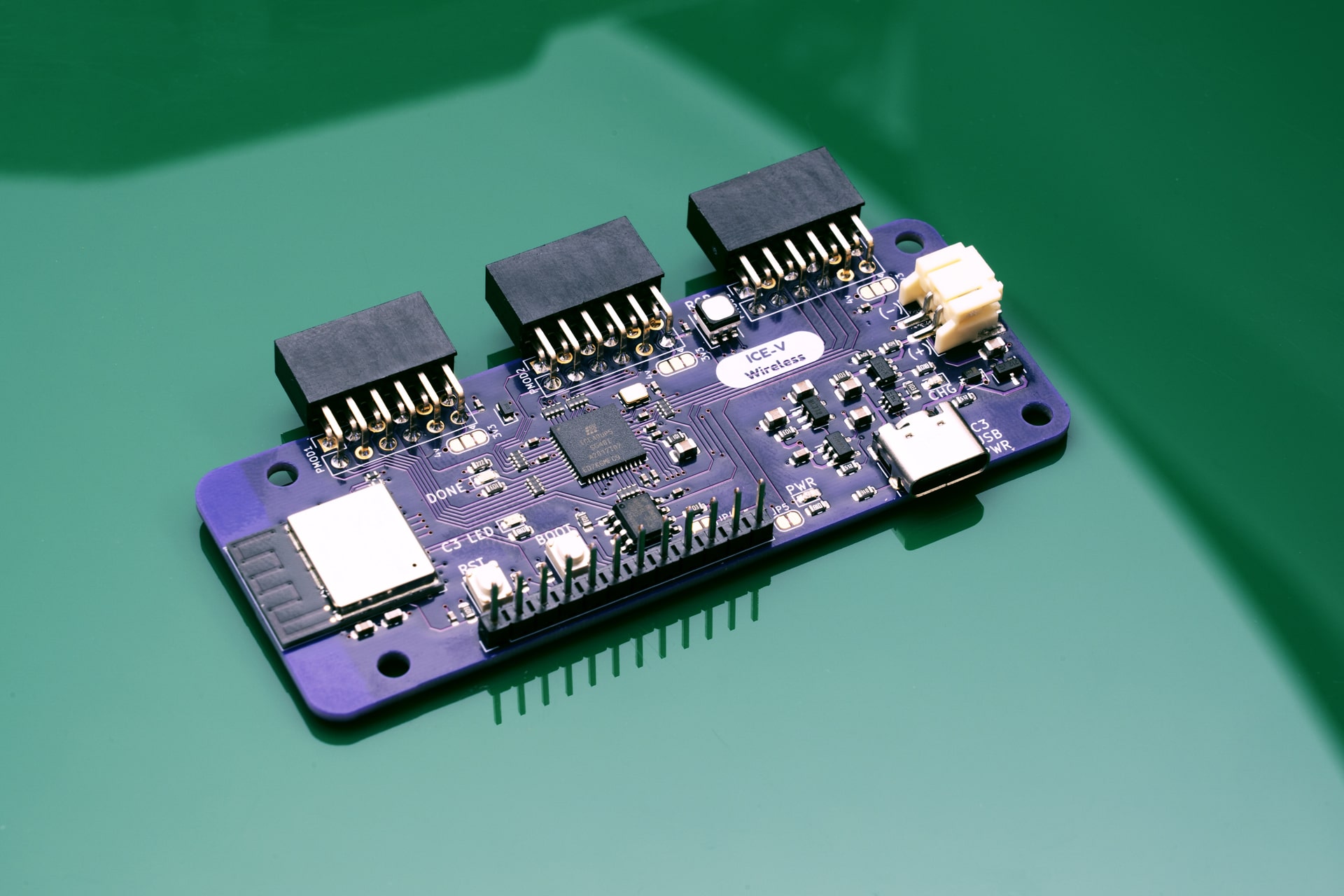 To seed the community with cool wireless FPGA boards.

One unit with through hole connectors included (unsoldered).

The case is printed in PETG, capable of tolerating temperatures up to 75°C (167°F).

*May have small imperfections* 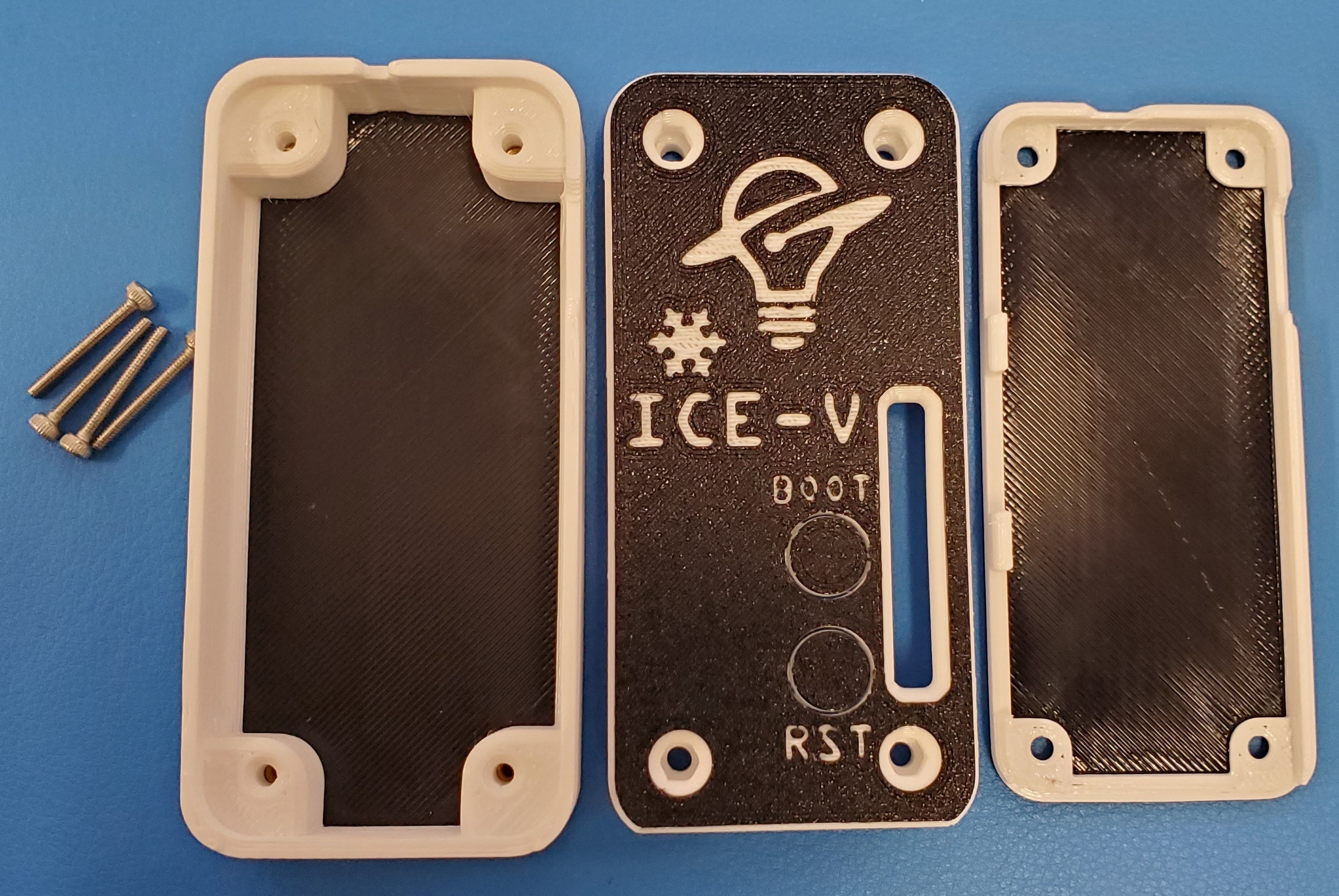 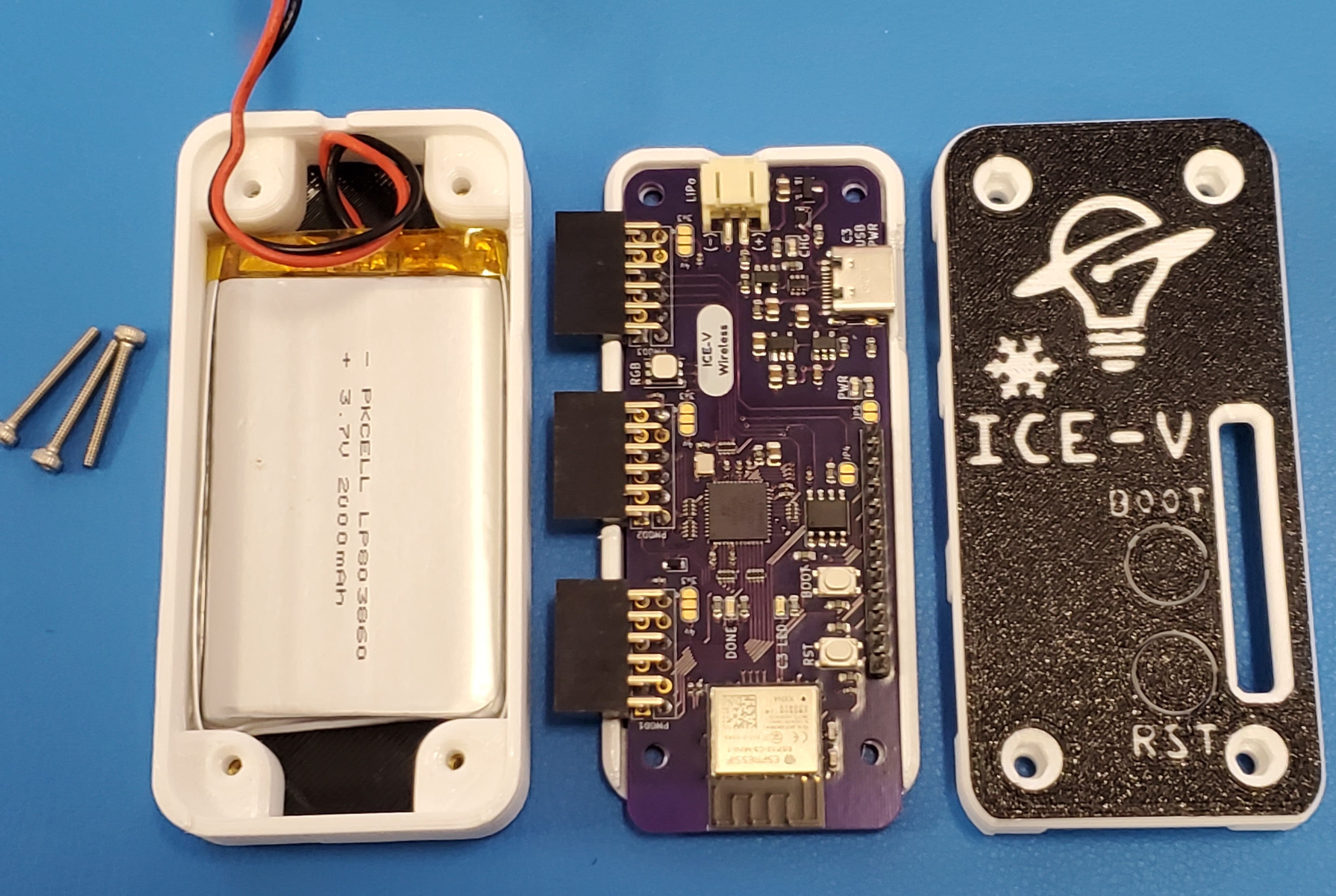 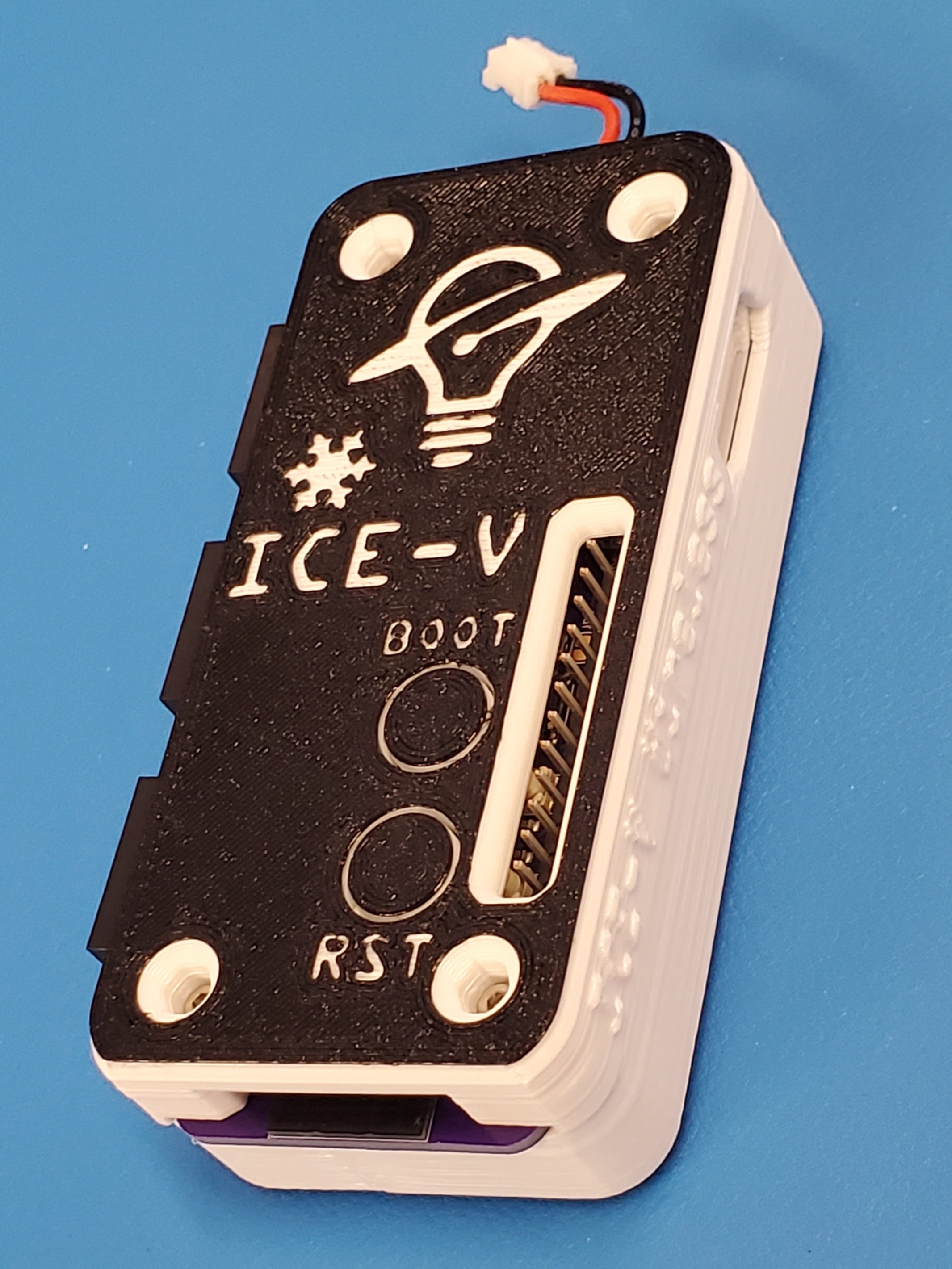 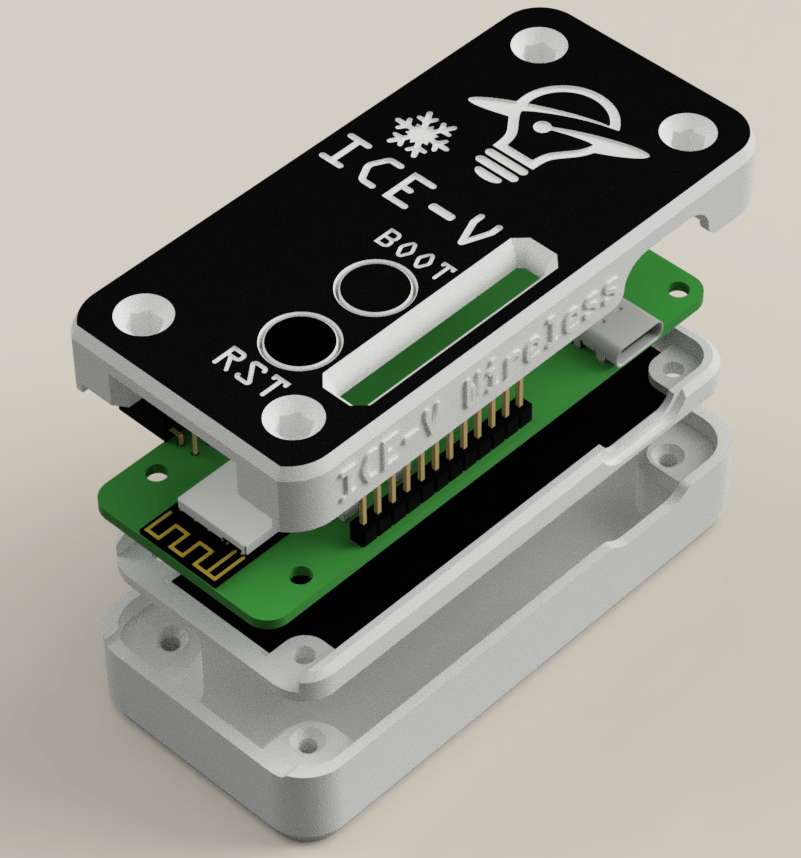 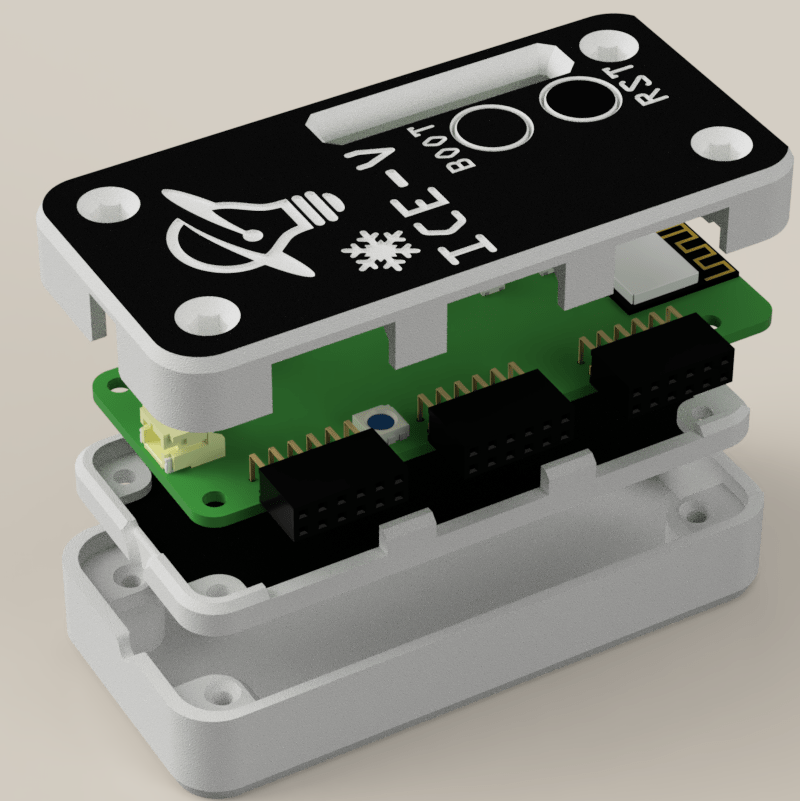 If you have already made an order, you can add it by going to your dashboard, clicking "view" on the order, and edit from the order invoice page.

Make sure your billing and shipping information is up to date while you're there. This campaign will be funded soon! 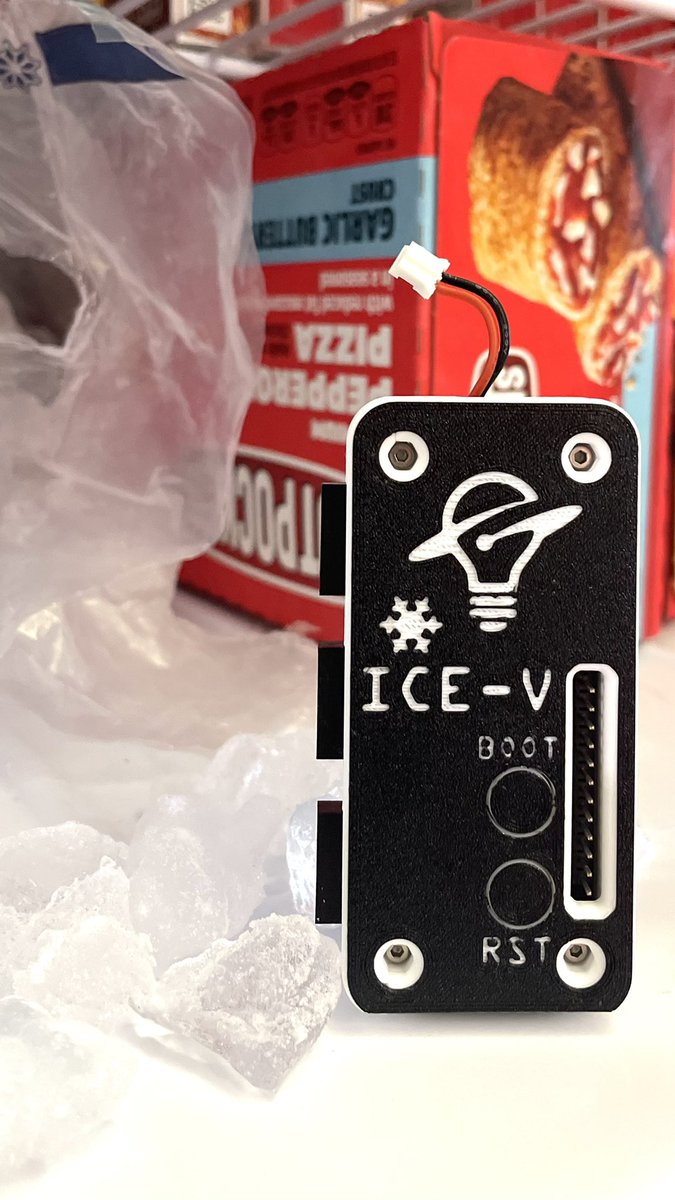 Though weekly updates were not posted for the last few weeks there has been plenty work going on in the community.

We hit 94% funding today so we are getting really close. Tell your FPGA friends, the campaign closes soon!

Seeing some rust posts on twitter for the ESP32-C3 we had to give it a try.

The standard ESP32-C3 port works just fine on the ICE-V wireless. Happy news for rustaceans out there!

Chris Friedt has volunteered and mainlined the base mainline Zephyr port for the ICE-V! 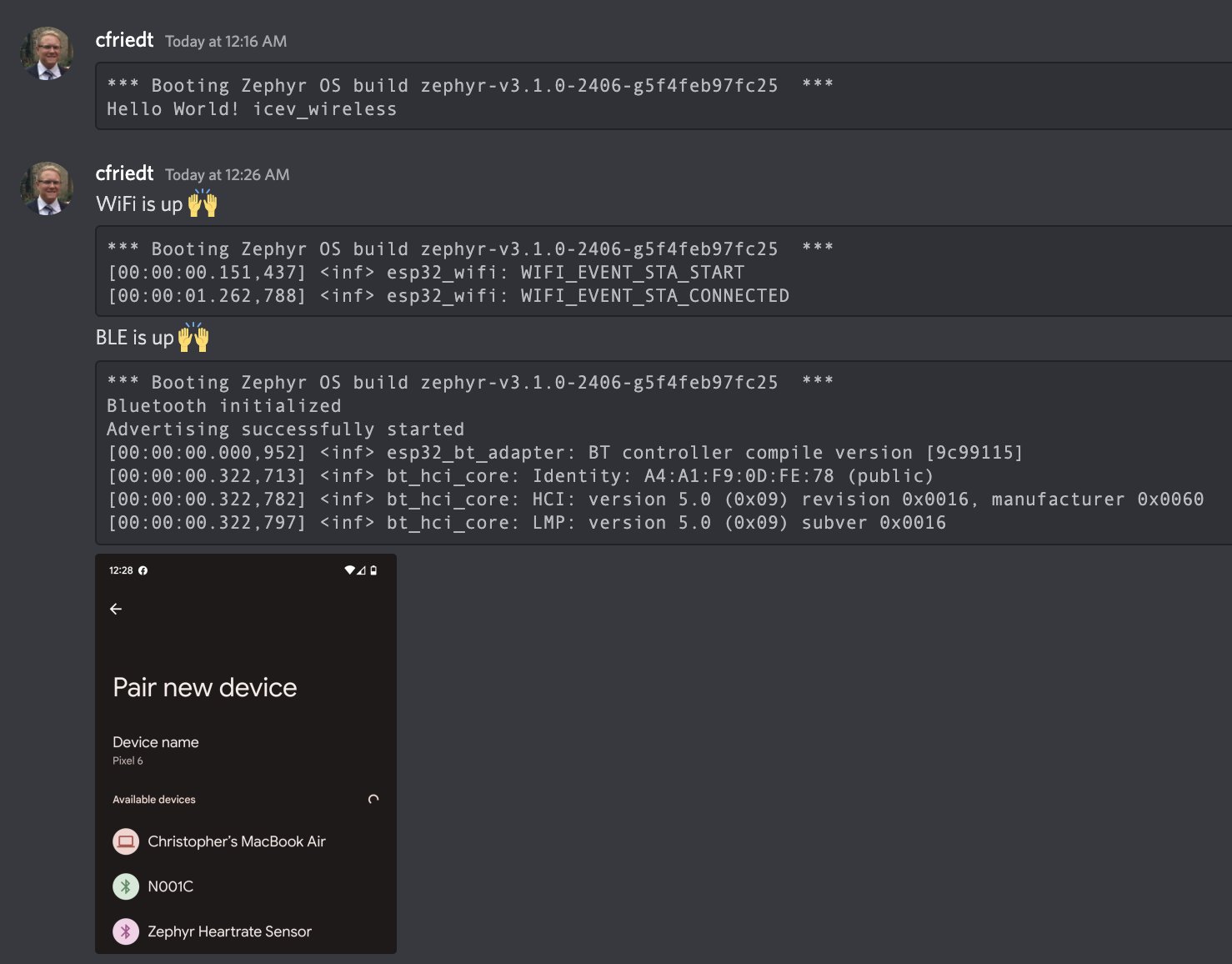 Work on Zephyr for RISC-V on the FPGA on ICE-V is also underway!

Gojimmypi continued his work on wolfSSL support and a blog post dropped today about the support that was facilitated by ICE-V wireless.

Eric has been working on the test fixture gateware/firmware and created a new repo to support it.

Griffin from GroupGets kindly provided a 3D printable case and we are going to make it available on the campaign when it is ready.

Here are some 3D print examples of his fantastic work!

To get involved in the collaboration join the QWERTY Embedded Discord server.

Some neat FPGA examples are in the works.

This week reached 65% funding and firmware development has been coming along nicely.

Eric was able to get a Micropython port up and running on the ESP32-C3 and has a script for flashing the FPGA. See the ICE-V-Micropython repo for instructions on how to get it working.

Sent a board out to gojimmypi and got some community development underway. Hope to see WolfSSL support in the near future.

Seen a significant reduction in stock of the ESP32-CE-1-N4 part. There are extended temperature and AWS IoT versions of the module still in stock and the pipeline appears to be okay such that we don't need to preorder.

There has been some initial discussion of creating a 3D printable case for the board and that may be in the works soon.

This week was a little slower bringing in more backers but that has not discouraged us and we continue to push firmware and RTL examples forward.

We sat down with Groupgets this week for a video interview. Watch for that to be released soon.

Eric has been digging around in the Arduino API documentation and running experiments to get familiar with that environment in order to port the basic firmware functionality from ESP-IDF to ESP32 Arduino. So far no roadblocks and he has gotten the WiFiManager library working for SoftAP provisioning (a much nicer one than what's available in IDF) as well as mDNS and unique hostnames so we can have multiple ICE-V on the network at the same time. Currently in progress is adding the TCP socket handler for the FPGA configuration and then the low level SPI/GPIO stuff needed for the actual functionality. We hope to have a first cut on this up on the ICE-V Github within the next few days.

There is also a community volunteer working on bringing up Zephyr support for both the ESP32 and ICE40. Hardware was shipped and we hope to see progress there in the upcoming weeks.

The parts are still under close watch to make sure that we can fulfill the campaign when it closes. All trouble parts have been pre-ordered.

Work on the test fixture is going to start next week.

The campaign is off to a great start with 58% funding in one week!

Many thanks to everyone backing campaign!

Eric has been hard at work on a WiFi provisioning application that provides a SoftAP which allows the user to provide credentials for the network of their choice.

There has been some investigation into supporting the icestudio software and the underlying APIO package. This would give a nicer experience for newer users that aren't command line warriors. This also allows for host platform independent tools which is great!

We having keeping a close eye on the stock of the various parts on the board. To avoid long lead times upon exhaustion we are preemptively ordering parts for low stock, long lead time parts.

There may be some subtle changes to the production PCBs. Mostly to tidy up the routing some and we may adjust the placement of the push buttons to be a little further from the generic single row header.

We are working manufacturing logistics in the background to ensure that we are ready for production as soon as the campaign closes. 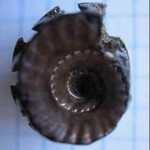 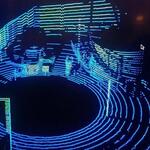 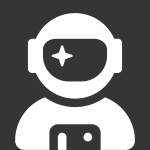 Designed to provide a platform for FPGA work with Bluetooth and Wi-Fi connectivity, this low-power board has a compact footprint.

Sponsor the great works of our community of developers and conservation technologists who are trying to make a real difference. Contact us at sponsor@groupgets.com for more information.

We are proud to support ICE-V Wireless in reaching its goal. 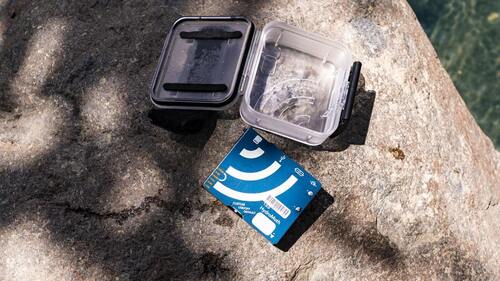 HydroMoth is the latest product from the AudioMoth range and offers everything needed to start recording underwater sound for extended periods of time at depths of 30-60m.... View Campaign
GroupFund 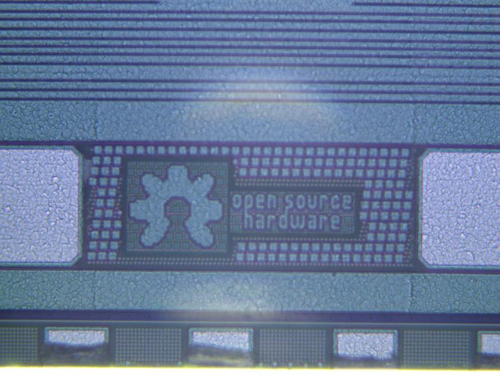 PyFive The PyFive project was originally conceived as a libre silicon MCU capable of easily running Micropython/CircuitPython. It would host a VexRiscv processor and have... View Campaign
GroupGet 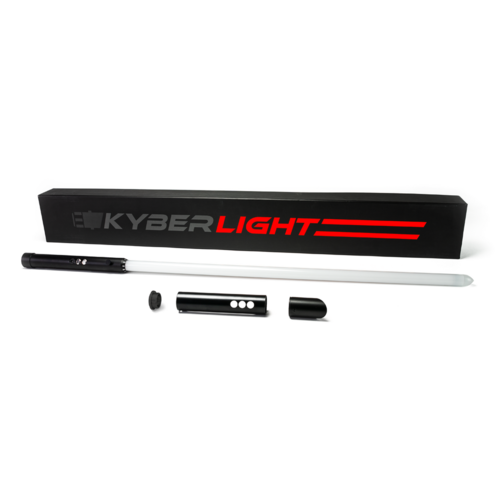 An elegant weapon for a more grown up in age, the Knight Pack comes with 3 accessories, a 32” blade and is fully customizable. The saber is combat ready and filled to the ... View Campaign

Add an email to receive a notification when ICE-V Wireless launches.